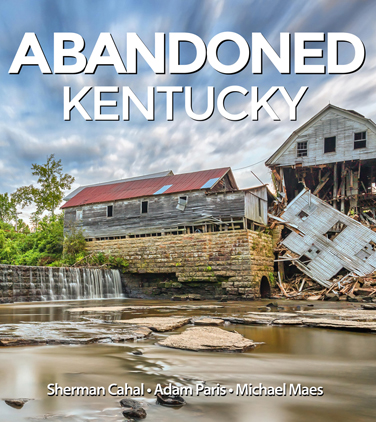 1. Your Facebook page Abandoned Kentucky is very popular. What made you decide to do a book featuring images of abandoned places from throughout Kentucky?

Sherman - Steve McManus, the founder of the “Abandoned Kentucky” Facebook group, reached out to me inquiring about the possibly of having a book published of abandoned locations in Kentucky. As my work mostly focused on the central and eastern parts of the Commonwealth, I requested the collaboration of Adam Paris and Michael Maes as they have photographed a considerable number of places in the western and south-central reaches of the state.

2. What is the hardest you ever worked to get a perfect shot?

Adam – Industrial locations are the hardest locations to work with, but the most satisfying and intriguing. The most intense location I’ve photographed is a multi-story industrial plant dating back to the late 1930s. Due to obvious reasons, wearing a respirator in the middle of summer made for a long and very hot day, especially climbing many stairs and having to bring extra lights to light paint dark areas and rooms. It was worth the trouble, and I would do it again in a heartbeat.

Sherman – Many years ago, I spent several hours hiking through dense woods, across several streams, and across marshy land to explore Old Crow and Old Taylor distilleries. It was worth the hike to get to the site but I was too exhausted to make the return trip. As I started to walk the road back to my parked car which was several miles away, a gentleman came by in his pickup truck and offered a ride.

Michael – One that comes to mind is an ice factory in Louisville. I was supposed to explore with a group of friends but I didn’t make it so I had to go on my own. I had to jump several fences, and the location was mostly dark. It was challenging to walk through with only the light of my phone, not to mention all the unfamiliar sounds. I spent four to five hours there alone, something I don’t recommend doing. It was scary!

3. The lighting in your photographs is incredible. Do you ever use flashes or is it all natural light?

Adam – Almost all of my images are done with a tripod and natural light. Most interior scenes usually have difficult lighting situations, so most will be bracketed exposures put together to make high dynamic range (HDR) images. In extreme situations, flashlights are used for light painting.

Sherman – Most of my photos are composed with just a tripod and natural light. Like Adam, most of my interior scenes include exposure bracketing to ensure that as much detail is captured as possible and to correct for any severe underexposure or overexposure of the photograph. For certain scenes, such as tunnels, a high-intensity LED discharge lamp will be used to illuminate the scene.

Michael – I shoot handheld with no tripod or flash. I am more of a run and gun photographer, meaning I am interested in getting in and out quickly. Whenever I’m on location, I am looking for dramatic lighting combinations. I return to locations several times looking for perfect lighting.

4. Is there a Kentucky photo you're still hunting for?

Sherman – I am still seeking out that quintessential Kentucky icon: bourbon distilleries, as they represent both a decline and rebirth of an industry staple.

Adam – I'm very interested in preserving commercial and industrial locations through photography. In Kentucky, for example, I hope to become a resource for photographing idled or decommissioned power plants.

Michael – I am looking for a grand estate that has been untouched for years.

5. What is it about abandoned places that keeps drawing you back to photograph them?

Adam – For me, it’s about combining photography with my passion for documentation and historical interest. At an abandoned school, I envision who roamed the halls and what they’re doing now. In an old abandoned home, I wonder about what conversations were had in a living room or who sang around a decaying piano. In a factory, I imagine the men and women who worked there on a daily basis.

Sherman – My passion is as much photography as historical research. It’s always fascinating to uncover the history of a location and to be able to share that information with a broader community of like-minded people. With so much knowledge lost to antiquity or regulated to difficult-to-access archives, there is a treasure trove of information awaiting discovery.

Michael – The drive to a location that I have not yet discovered brings the excitement of the search to find a hidden gem that no one has photographed.

The publisher would like to thank Heritage Canada through the Canada Book Fund for its support of our publishing activities. The publisher would also like to acknowledge the Province of Nova Scotia and the Film and Creative Industries for its financial support.

Select MacIntyre Purcell Publishing Inc. titles are distributed in the US by Baker and Taylor Publisher Services.