EVERYTHING BRITISH COLUMBIA The Ultimate Book Of Lists 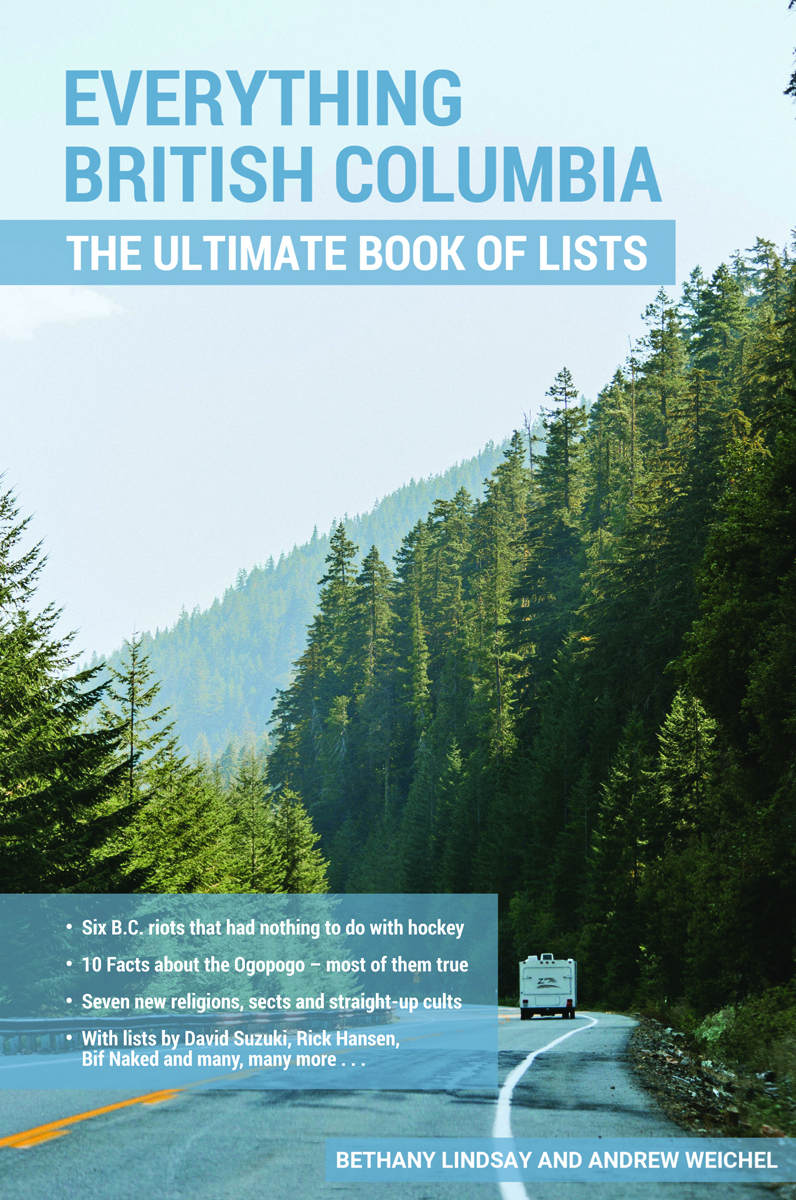 Everything British Columbia will take you on a wild romp across the province. From Lainey Lui's list of the five biggest celebrity scandals in B.C., to crime historian Eve Lazarus's list of the 10 most bizarre murders, to chef Tojo's top 10 delicious sushi ingredients, and Stephen Hui's list of 10 long B.C. hikes worthy of your bucket list ... it is all here. From 11 cities (and one planet) Vancouver has played in the movies to 10 facts about the Ogopogo (most of them true) to 10 gigantic B.C. roadside attractions, this is a book that will wow and entertain you on every page. In addition to 10 weird and wonderful B.C. museums to 12 crotchety quotes form legendary newspaperwoman "Ma" Murray, and 10 times Kim Campbell was delight - fully candid on Twitter, we get well-known British Columbians to weigh in on their favourite things about British Columbia. In Everything British Columbia: The Ultimate Book Of Lists you'll also find lists by David Suzuki, Rick Hansen, Bif Naked, Roy Henry Vickers and many, many more. If you love British Columbia (and we know that you do), you'll love Everything British Columbia: The Ultimate Book Of Lists.

A FUN READ
"Who doesn't love a good list? From the 10 WTF moments in B.C. politics, to the six B.C. riots that had nothing to do with hockey ... this is a great gift for the trivia lover in your life. A fun-to-read book that's perfect for the beach or the bathroom!" — LYNDA STEELE, CKNW talk show host

A MUST-HAVE BOOK
"Everything British Columbia really is the ultimate book of lists! Bethany Lindsay and Andrew Weichel have done a fantastic job of compiling fascinating facts about our province from politics to crime to the paranormal. Every B.C. household should have a copy!" — KIM BOLAN, reporter at the Vancouver Sun

Bethany Lindsay is the author of British Columbia Burning: The Worst Wildfire Season in B.C. History. She has worked for The Vancouver Sun, and CTV, and has reported internationally for The Cambodia Daily in Phnom Penh. She currently writes for CBC News and lives in Vancouver. Andrew Weichel is currently the online producer at CTV Vancouver. His work has appeared in The Vancouver Sun and WestEnder newspapers.

Order it now via Chapters