Toronto Book of Everything 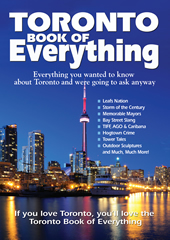 From ancient royal palaces, all- From Hogtown to capital city and Leafs Nation, from cold wet winters to desperately humid summers, from Blackberry-addicted Bay Street financiers to profiles of Ed Mirvish, Glenn Gould, David Cronenberg and Rush, no book is more comprehensive than the Toronto Book of Everything. No book is more fun!

Well-known Torontonians weigh in on what they love about their city. Linda Leatherdale reveals her top five places to power lunch; Chef Jamie Kennedy shares five ways Toronto inspires his menus; Paul Godfrey tells us who the top Toronto powerbrokers are; John Sewell points out five Toronto buildings not to miss; and Kevin O'Leary shares his uniquely Toronto innovations. From Bay Street slang and the Great Toronto Fire to immigrant city and Pride Toronto, it's all here!

Whether you are a native Torontonian or visiting for the first time, there is simply no more complete book about Toronto. If you love Toronto (even just a little bit), you'll love the Toronto Book of Everything.