Edmonton Book of Everything 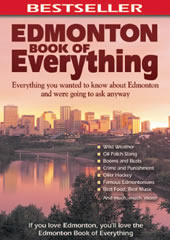 WORTHY OF A SERIES . . .
"I wanted to see if the contents lived up to the front cover boast that it included everything you wanted to know. I read it cover to cover. This is a book worthy of a series."
—Fred Hatfield, Yarmouth Vanguard

From gold to oil fever to booms and busts, the West Edmonton Mall and the SCTV studio and profiles of W.P.Kinsella, Gretz and Emily Murphy, no book is more comprehensive than the Edmonton Book of Everything. No book is more fun!

Well-known Edmontonians weigh in on their favourite things about their city. Former Oiler captain Jason Smith weighs in on his best Battle of Alberta moments;Mayor Stephen Mandel weighs in on why he loves being mayor of Edmonton; Jim Hole picks his five quirkiest plants; Mark Lisac offers up the 5 biggest political scandals; and NAIT President Sam Shaw tells us his top five Edmonton restaurants to do a business deal. From politics to weather to the Klondike, Edmonton slang, serial killers and the city's First People...it's all here!

Whether you are a lifelong resident or visiting for the first time, there's no more comprehensive book about Edmonton. If you love Edmonton, you'll love the Edmonton Book of Everything!