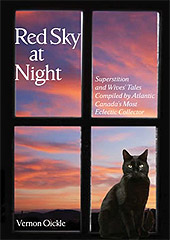 Superstition and Wives' Tales by Atlantic Canada's Most Eclectic Collection

"Red sky in the morning, sailor take warning; red sky at night, sailor's delight." Maritime tradition holds that such warnings be taken seriously. And with good reason; lives often hang in the balance. Sailors aren't alone in seeing in the world a connectedness that is often lost in the modern world. In Atlantic Canada, thankfully such beliefs still play a role in everyday life. This is a collection of many of those age-old beliefs from the region's best and most eclectic collector.

We also get well known Atlantic Canadians to weigh in with some of their superstitions. Gemini award winning actor and writer, and star of the hit comedy This Hour Has 22 Minutes Cathy Jones recalls many of the "old sayings" from her childhood. Author Allan Lynch remembers home remedies administered by his parents, aunts and grandparents. Former NHLer Glen Murray talks about the superstitions of the game.  And singer/songwriters Dave Gunning, Joel Plaskett, Terry Kelly and Rita MacNeil all admit to being just a little bit superstitious. From Nancy Regan, meteorologist Peter Coade, movie reviewer Richard Crouse, and Bluenose II Captain Philip Watson, they are all here.