Vancouver Book of Everything 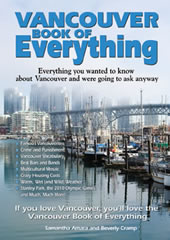 HANDY . . .
"Literally, there is a glimpse of the whole city wrapped up in a handy sized volume."
— Allison Vail, Ladysmith Chronicle

INTEREST . . .
"Even born-and-bred Vancouverites will doubtless find something of interest in the Vancouver Book of Everything."
— Steven Schelling, The Westender

From "Gassy" Jack Deighton and the Klondike Gold Rush to the Chinese Head Tax to Japanese Internment, the Strathcona Protest,Vancouver Canucks and the 2010 Olympic Winter Games to profiles of the original 'Dominic Da Vinci,' Larry Campbell, famed "Gen-Xer" Douglas Coupland, environmentalist David Suzuki, and actor Jason Priestly, no book is more comprehensive than the Vancouver Book of Everything. No book is more fun.

Well-known Vancouverites weigh in on every aspect of their beloved city. Historian Chuck Davis gives us his top five events that shaped its history; author Jen Sookfong Lee gives us her top five best things about living in Vancouver; Vancouver Sun restaurant critic Mia Stainsby gives us the city's top five cheap eats and Global TV's meteorologist,Mark Madryga, offers up his top five Vancouver weather events. From the city's First People and infamous weather to its slang, heinous crimes, and the ubiquitous Jappa-dog, it's all here.

Whether you are a lifelong resident or visiting for the first time, there is no better resource about the city of Vancouver. If you love Vancouver – and who doesn't – you'll love the Vancouver Book of Everything.